He was a legend and icon of the American West, and his photography has been seen by nearly every person with an interest in the western lifestyle. I had the privilege of meeting and learning from David Stoecklein, one of my photographic heroes, at a small workshop at his Bar Horseshoe Ranch near Mackay, Idaho in June of 2014. Two of David’s sons, Drew and Taylor, were also instructing at the workshop. 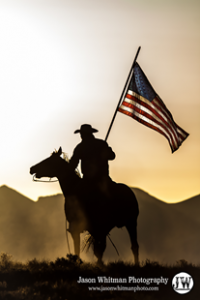 I was impressed with how well organized he was, and I thought his idea for a cowboy with an American flag for our first morning shoot was very cool. We had to get up at 4:00 am to get situated and drive to the location in order to be ready for the sweet light, but it turned out to be worth it. When we were done shooting, David took all afternoon to look at our images and give us ideas. I could tell he really enjoyed sharing his craft and teaching his students. 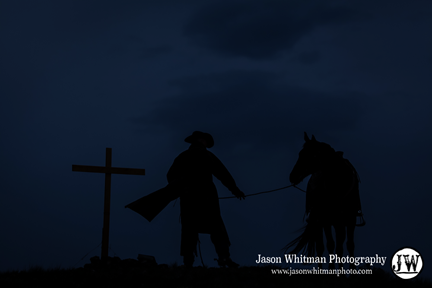 For the evening shoot, his idea was to set up a bunch of crosses on a ridge and use the sunset to create a certain mood with the images. It was definitely a successful idea. Largely overcasts weather allowed for a beautiful sunset, but drama for the mood I wanted to create with my shots.